Detail work on wood and metal

I was introduced band files when I was working at the Smithsonian, making the brass mounts that support museum artifacts on display. The mounts were often complex shapes that needed to be sculpted to blend in with the objects they supported. The band file could do the work quickly and with a light touch that wouldn’t damage delicate bits of brass.

The band file I’d grown to like was very expensive, so I never bought one. I did buy an inexpensive band-file attachment for an angle grinder, but it was a bad pairing. Angle grinders are too heavy, powerful, and loud—and spin too fast—for the work I do with a band file.

The Wen 1/2″ x 18″ belt sander, model 6307, was what I was hoping to find, and it came at a very affordable price. It has a motor about the size of a Dremel tool and weighs, with cord, just 2 lbs 6 oz. To install a belt on it, you press on the front roller to push the arm against its tensioning spring until it clicks; that shortens the arm about 3/8″ so a belt can be installed. A fresh belt can be a bit difficult to put on, even with the arm retracted, but it will eventually slip into place. Used belts that have stretched just a bit tend to go on more easily. The push of a button releases the arm, putting the belt in tension.

The arm can be pivoted 25 degrees up or down from its straight position to accommodate jobs at odd angles. A fitting for dust collection clips onto the tool’s right side. It covers the belt tensioning button, so the fitting has to be removed when changing belts. With a vacuum attached, the dust collection is very effective; I don’t see any dust escaping.

Just behind the front roller there are two base plates, one on top, one on the bottom, that make contact with the sanding belt and back it up for working a flat surface. The plates are slightly narrower than the sanding belts, so the belts can work into corners. Closer to the 6307’s body the belt is unsupported, so it will take a gentle curve for working convex contours and softening corners. The front roller has a diameter of 5/8” and can reach into concave surfaces, though it works like a gouge and can’t fair a curve.

A dial at the back of the 6307 controls the speed, which ranges from 1,100 to 1,800 feet per minute. When turned on, the tool isn’t disagreeably loud at its lowest speed, but at half speed it starts to get loud and whine, and it’s certainly time for hearing protection. The vents for the motor’s cooling are at the forward end of the body, where I like to grip the tool for fine control, but when the air flowing from the vents gets hot, it’s time to back up. Farther back on the body, a rubber insert assures a non-slip grip.

As a test of sanding power, I put an 80-grit belt on the 6307, dialed the speed up to the maximum, and cut a 1/2″-wide “kerfs” all the way through a 1″ x 1″ piece of softwood. The 6307 could lop off the end of that stick in an average of 37 seconds. I had to let the belt do the work—if I applied a firm pressure, the drive wheel would slip and the belt would bog down or stop.

The 6307 comes in handy for working the saddle-back shape between the horns of wooden cleats and the complex transition from blades to looms on oars and paddles. On metal, the 6307 knocks down sharp edges quickly and excels at working inside corners and cleaning up flux and oxidation left by brazing.

The 1/2″ x 18″ sanding belts cost around $1 each and come in grits from 40- to 400-grit, so the 6307 can take on jobs from the rough shaping of wood to quick sharpening jobs on outdoor equipment such as hatchets and machetes.

We began with a 2-nautical-mile crossing to the wooded, low-lying Pearse Islands, and headed east by southeast. Immense whirlpools and gyres boiled up near Weynten Passage at the north end…

The HX890 floats and is submersible down to 1-1/2 meters for 30 minutes, important features for boating kit. It functions as a standard VHF marine-band two-way radio and can transmit… 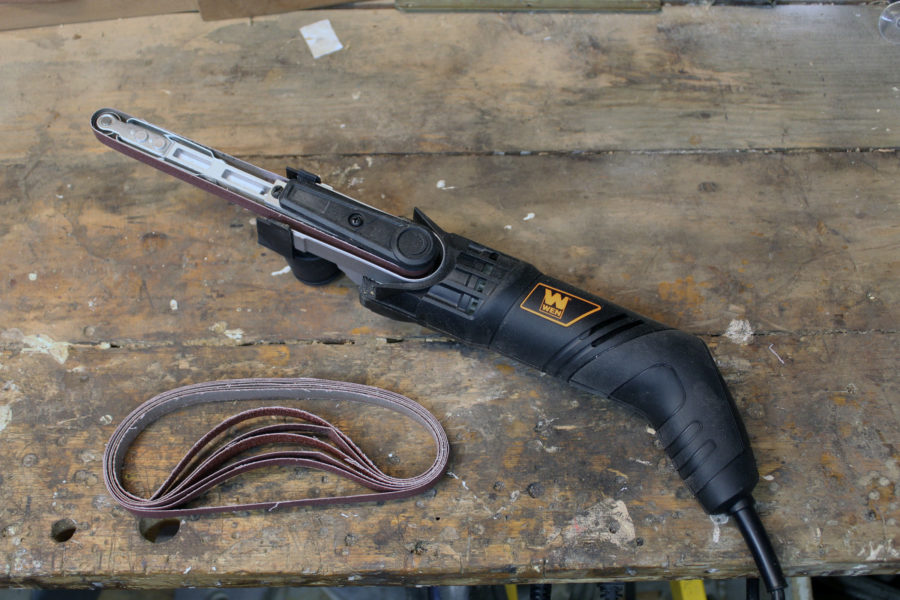 The QL15 model has two black, rubber-coated metal S-hooks, one of which is on a 9-1/2” piece of 1” polyester webbing, and the other is at the end is a…

When I started building boats in 1978, I used a blade guide, a large diamond hone and three Japanese water stones to sharpen my tools. I was proud of the…