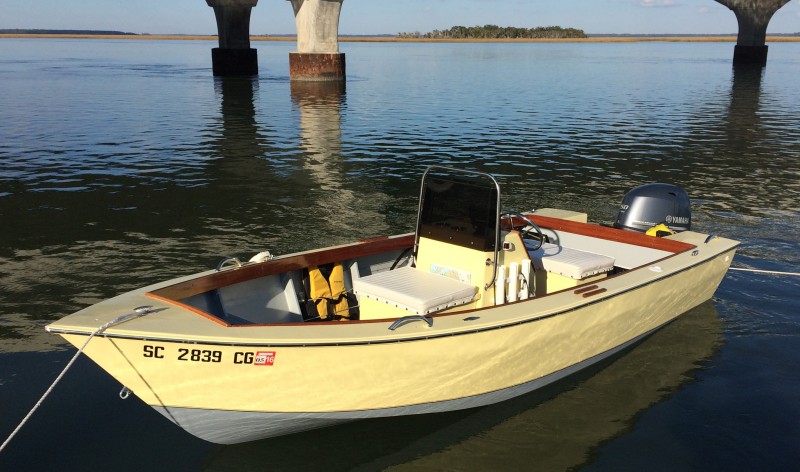 Last April, Tom Potrykus launched his center-console outboard skiff, TRADEOFFS, in the shallow inshore salt water near Beaufort, South Carolina. When the hull touched the water for the first time, it was already 15 years old.

Tom had started building the boat in 1998 shortly after retiring. At that time, he and his wife, Sue, lived in Illinois. Tom found the plans for the 16′ by 6′ Shoestring skiff advertised in WoodenBoat magazine. It was designed by Karl Stambaugh for Gary Clements of GFC Boats in New Jersey. Tom bought the plans, a book on how to build a plywood boat, 13 sheets of marine ply, fiberglass cloth, epoxy, and the tablesaw and belt sander he had always wanted.

He got off to a good start, and in five months he’d finished the hull and given it a coat of primer. Winter brought a halt to the project, and he covered the hull and put out in the yard. It soon lay buried in the snow, but only briefly. Tom and Sue bought a house on an inshore island near Beaufort, South Carolina, so the hull was pulled out of a snowdrift and moved to their new home. Tom was eager to take up saltwater fishing and bought a used fiberglass boat. The unfinished skiff sat gathering dust under the house for 13 years and got to be a bit of a joke in the neighborhood. So last year Tom decided it was time to finish the project.

This wasn’t Tom’s first boat. He had built and repaired several small wooden boats for power and sail over the years, so he had more than enough experience to take on building a Shoestring. It’s designed for easy construction. The plans include full-sized patterns for the frames, so lofting isn’t required. The ½″ plywood bottom and 3/8″ plywood sides are tacked and taped along the chines. Tom used deck screws to quicken the rough assembly and later replaced them with bronze to finish the construction. He modified the hull slightly by lowering the sheer about 6″. “I think the original design was for rougher water than I like to fish in,” he said. That lightened the boat, and Tom cut more weight by reducing seat console sizes. That reduced TRADEOFFS’ draft to accommodate South Carolina’s ubiquitous oyster bars. Moving the gas tank from the stern to the console leveled the boat and further reduced the draft.

TRADEOFFS, Tom says, “runs straight, true, and fast. The 50-hp Yamaha is all this 650-lb boat needs. It uses only as much water as a skiff, and handles the rough chop just fine, much to the delight of my wife.”

Tom reports that TRADEOFFS turns heads wherever she is launched or docked. “While I see room for improvement in my craftsmanship, people seem to appreciate looking at something other than yet another white fiberglass boat—a little brightwork goes a long way.” TRADEOFFS’ name, he says, “reflects what she is and what a lot of life is.”

Study and construction plans for the Shoestring skiff are available from Chesapeake Marine Design.

At Dark Harbor, Maine, the legacy of the Rossiter Skiff outshines that of even its most popular fiberglass counterparts. Dark Harbor, located on the mid-coast island of Islesboro, is home…

In the early 1960s Martin Litton, a travel editor for Sunset magazine, came to the McKenzie River in Oregon to write a story. When he got there, he saw wooden…

As age makes its inevitable changes to the sailor’s once supple joints, certain positions that were once assumed without thought become uncomfortable, if not actually painful. When I was younger…

There are many tools you can use to call for help when you’re on the water: VHF radios, handheld or aerial flares, mirrors, flags, horns, smoke, and dyes. They all…