A better gas can

I’ve grown rather fond of the little 2.5-hp outboard motor I bought 15 years ago, not long after small four-strokes became available. I couldn’t see myself using a two-stroke, sneering as I do at the sight of outboards trailing an acrid blue fog. The four-stroke is easier on the environment—it has a two-star, “very low emission” rating from the California Air Resources Board (CARB)—so I’m always ashamed when I overfill the little one-quarter-gallon internal fuel tank and leave a rainbow sheen on the water and adding noxious vapors to the atmosphere.

The gas cans I’ve accumulated have all been messy affairs. The oldest had a nozzle that stored inside the can, which was dripping with gas from the get-go,and an air vent on the handle, which were banned in 2009. A more recent can has a flexible nozzle with a locking valve in the handle. Both cans require knowing when to stop pouring as the level of gas rises to the fuel-tank opening. At least with the newer model I can release the valve to stop the flow, but the gas keeps coming until the nozzle has drained itself. A third can has a spring-loaded nozzle you’d hook over the mouth of the tank, and the gas is supposed to stop flowing when it covers the end of the nozzle. It isn’t very reliable, so I no longer use it.

The No-Spill Gasoline Can has been a great improvement. I bought the 1.25-gallon size. There are 2.5- and 5-gallon sizes, more fuel than I usually need and too heavy and awkward to hold out over the transom to get to the motor. The HDPE can has notably thick walls and is quite rigid compared to my previous cans. It has a translucent vertical stripe at each end for a quick visual check of the level of fuel in the can. Its fill opening is 2-1/8″ in diameter, providing a much better view into the can when filling than the 1-3/8″ opening of my previous cans. Inside is a flame mitigation device (FMD), a white plastic insert like a skinny colander, that works to saturate the space with the gas vapor, crowding out the oxygen and making the mixture so rich that won’t ignite with the introduction of a spark or flame.

The locking ring for the cap has the usual ratchet to prevent children from opening the can. I found the ratchet difficult to disengage; its teeth are painfully sharp, so I sanded the points a little. When the cap is tightened, the ratchet goes well past the tab on the can. I’ve been used to having the caps on other cans come tight mid-ratchet. That’s what’s suggested by the instructions on the No-Spill can, but I found the lid sealed about an eighth of a turn beyond the engagement of the ratchet.

The nozzle has a cap that’s connected to keep it from getting lost. (If my older cans had caps, they’ve all taken a hike, allowing vapors to escape and grit to get in.) There’s also a molded flange to hook over the lip of the fuel tank’s fill spout, steadying the pour and taking the weight of the can.

Opposite the nozzle there is a green valve plunger. Depressing it allows gas to flow; releasing it stops it. The flow will also stop automatically if the fuel in the tank rises to cover the nozzle. A vent built into the nozzle is then prevented from letting air into the can, a partial vacuum is created, and the fuel stops flowing. After releasing the valve plunger, the pour spout can be removed from the tank without any spillage.

When I first tried the can, I filled it with water before filling it with gas. Several times the flow didn’t stop automatically. Air was somehow getting into the can, allowing it to continue to pour. I thought I hadn’t seated the cap thoroughly but that wasn’t the case. Air was getting through the hole at the top of the valve button when I didn’t have my thumb squarely over it. With my thumb sealing the hole, the can works perfectly.

The No-Spill can isn’t quite fool-proof, but it is sturdy, well designed, and can keep the fuel where it belongs—contained.

The No-Spill cans are available from numerous retailers and online sources. Prices range from $21 for the 1.25-gallon can to $36 for the 5-gallon.

I row and paddle year-round along the city’s ship canal. There’s a 7-knot, no-wake zone all along its 7-1/2-mile length, and during the summer, especially on weekends, the canal sees…

The east side of the Bustard Islands was all shoals and breakers, with a broad band of granite shelves and outcroppings stretching half a mile or more offshore. Typical for…

If you find oars unruly subjects for varnishing, you can get them to behave themselves, as Ben Fuller of Cushing, Maine, does by cantilevering them on a pair of sawhorses.…

The No-Spill Gasoline Can has been a great improvement. I bought the 1.25-gallon size. There are 2.5- and 5-gallon sizes, more fuel than I usually need and too heavy and…

The eTape16 takes my fallibility out of the process. It is a 16′ tape measure with an onboard computer and a digital readout. The 3/4″-wide tape has the usual markings…

Trailering a boat comes with its own set of limitations, and cartopping a boat on his van didn’t appeal to him either, but a nesting sectional boat could go in… 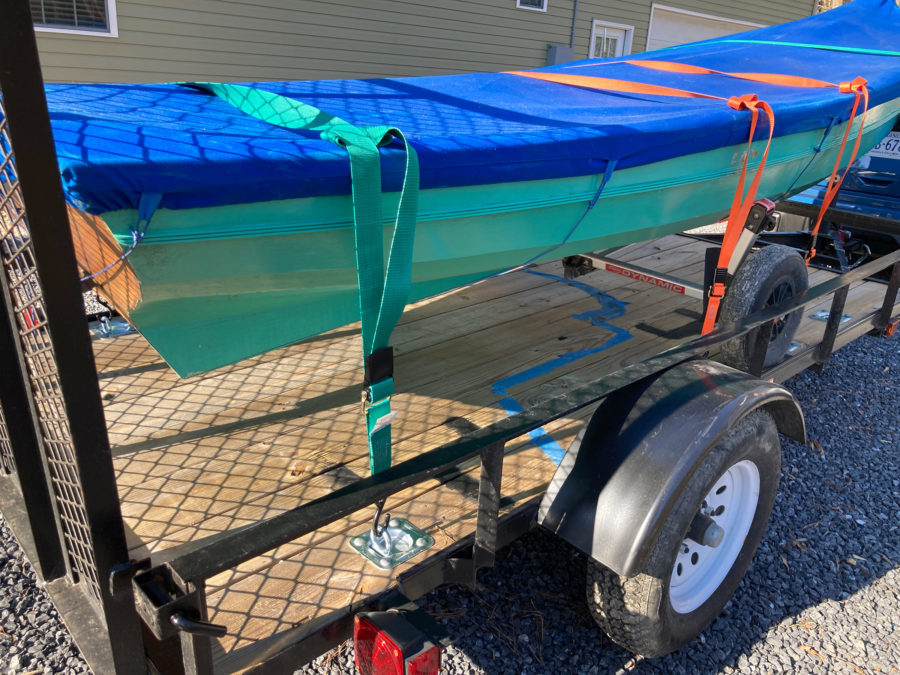 The most important considerations for any rain jacket are how well it keeps water out for an extended period and how comfortably it’s able to do so. The Torrentshell 3L…