Nathaniel Holmes Bishop III was born in Medford, Massachusetts, on March 23, 1827, and died in Glens Falls New York, July 2, 1902. In his time, he was quite well known for books he had written about his travels in small boats. I first heard about him, quite by accident, in the spring of 1982. I was working part-time at the Wooden Boat Shop, located, appropriately, on Boat Street in Seattle. On a sunny summer morning, I was manning the front counter when the mail came in and among that day’s mail was the latest issue of Wooden Canoe, Volume 11 of the Wooden Canoe Heritage Association’s magazine. The store was empty so I had some free time to browse through it.

I skimmed over an article written by Walter Fullam of Princeton, New Jersey about building canoes by laminating kraft paper with glue. That was mildly interesting, but what captivated me was an excerpt from Bishop’s Voyage of the Paper Canoe: A geographical journey of 2500 miles from Quebec to the Gulf of Mexico, during the years 1874—5. Hungry for the rest of Bishop’s story, I found an old copy in the University of Washington’s library and read it from cover to cover. His writing was certainly a product of the 19th century, but charming and evocative:

Finding that the wind usually rose and fell with the sun, we now made it a rule to anchor our boat during most of the day and pull against the current at night. The moon and the bright auroral lights made this task an agreeable one. Then, too, we had Coggia’s comet speeding through the northern heavens…. In this high latitude day dawned before three o’clock, and the twilight lingered so long that we could read the fine print of a newspaper without effort at a quarter to nine o’clock P. M.

And he did not lack a good sense of humor. About his parting with David Bodfish, his traveling companion, briefly, from Quebec City to Troy, New York, he writes:

I had unfortunately contributed to Mr. Bodfish’s thirst for the marvellous by reading to him at night, in our lonely camp, Jules Verne’s imaginative Journey to the Centre of the Earth. David was in ecstasies over this wonderful contribution to fiction. He preferred fiction to truth at any time. Once, while reading to him a chapter of the above work, his credulity was so challenged that he became excited, and broke forth with, “Say, boss, how do these big book-men larn to lie so well? does it come nat’ral to them, or is it got by edication?

Having grown up on the West Coast, I knew about the Inside Passage woven into the coasts of British Columbia and Alaska, but I had no idea that there was an even longer and better protected thread of waterways that connected Canada to Florida. After I returned Voyage of the Paper Canoe to the library, I paid regular visits to the book with a weighty pocketful of nickels and carefully photocopied every page of it. I needed to have a copy because I’d decided, even before I’d finished reading the book, that I would build a paper canoe and retrace Bishop’s route. He would be my guide. I was approaching 30, not quite sure what I was going to do with my life, and had no obligations to prevent me from embarking on a voyage that would take several months. I spent the next year trying to figure out how to laminate a paper hull, and in the late fall of 1983, with a craft-paper canoe of questionable durability on my Volkswagen bug’s roof racks, I headed to Quebec City. Four months later I had reached Cedar Key on Florida’s Gulf Coast. The voyage had only whetted my appetite.

I came home, read Bishop’s Four Months in a Sneak Box: A boat voyage of 2600 miles down the Ohio and Mississippi rivers, and along the Gulf of Mexico, made a photocopy of it, and in the winter of 1984 built a sneak box. In November of 1985, I loaded it on top of a drive-away and headed across the country to Pittsburgh, where I’d follow Bishop again to Cedar Key, this time by the inland route.

I kept my copy of Four Months in the chart case and kept up with Bishop day by day as I descended the Ohio River and then the Mississippi with him. Not all of the landscape had been changed by the 110 years between us. Cave-in-Rock, a 30′ wide cavern on the Illinois side of the Ohio is still there, as is the burial mound in Moundsville, West Virginia. And most of the Mississippi is isolated from civilization by levees so it’s the same wilderness the Bishop rowed through and the people who live along the river were every bit as interesting and generous as they had been in Bishop’s account.

I made good time, especially along the Gulf Coast where I had some good sailing, and reached Cedar Key in 2-1/2 months. Although my pursuit of Bishop was suddenly over, he had given my life a new and clear trajectory, one that eventually lead me here, to Small Boats Monthly.

Of the last night of his voyage, Bishop writes:

Lying there under the tender sky, lighted with myriads of glittering stars, a soft gleam of light stretched like a golden band along the water…. It seemed to be the path I had taken, the course of my faithful boat. All I could see was the band of shining light, the bright end of the voyage.

What he had seen behind him, that bright path, was what I had seen stretching out ahead of me. 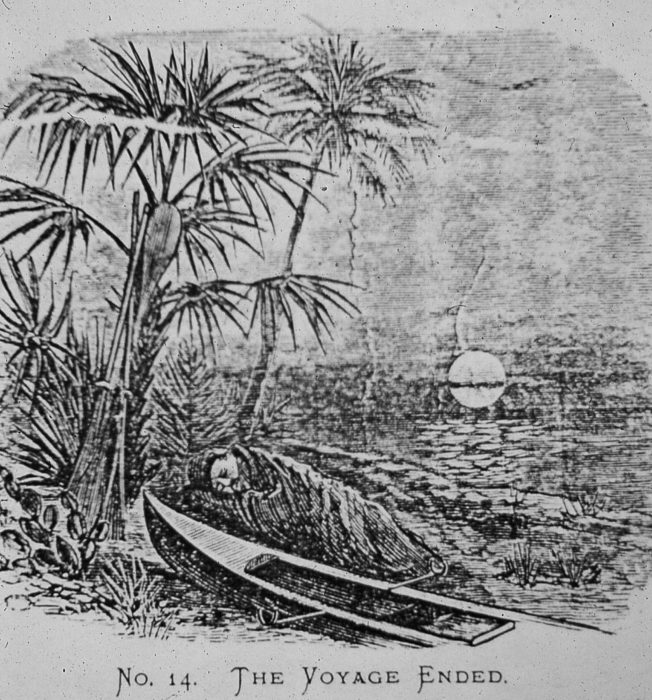