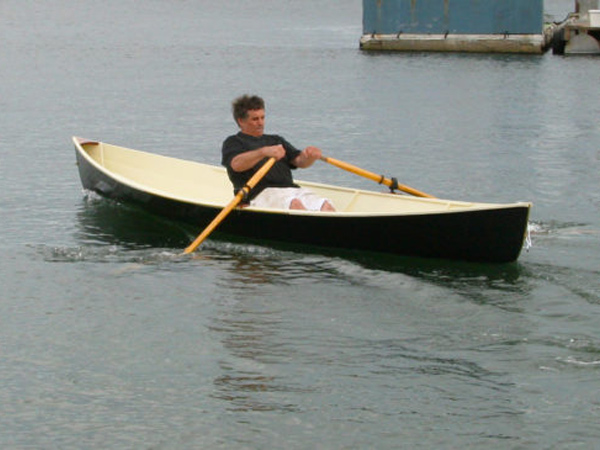 When we reviewed the Drake Raceboat in our September 2017 issue, designer Clint Chase was studying the prototype, putting the finishing touches on the plans, and preparing to produce kits. The boat is now available both as plans or as a kit.

Those of you who enjoy rowing a go-fast boat might enjoy the Drake Raceboat. Our review pointed out: “The boat is quite easy to accelerate; a half dozen strokes and it was off and running. I did some speed trials in a marina where there was neither current nor wind. With a lazy, relaxed effort I easily maintained 3-3/4 knots; a sustainable exercise pace brought the speed up to 5 knots. Fluctuations in GPS speed readings… in the lightweight Raceboat spanned at least 1-1/2 knots—I’d estimate that the boat’s sprint speed averages out around 6 knots. It’s a fast pulling boat. While the Drake Raceboat is designed ‘for the greater speeds in race conditions,’ you don’t have to compete to appreciate the boat. It will give you an exhilarating workout and reward improvements in your stamina and technique, but it’s not so high strung that you can’t take it out for a relaxing outing.”

With winter coming on, it’s a good time to retreat to the shop for a boatbuilding project. By spring you could have a Drake Raceboat ready to row. You can now order plans or kits from Chase Small Craft.