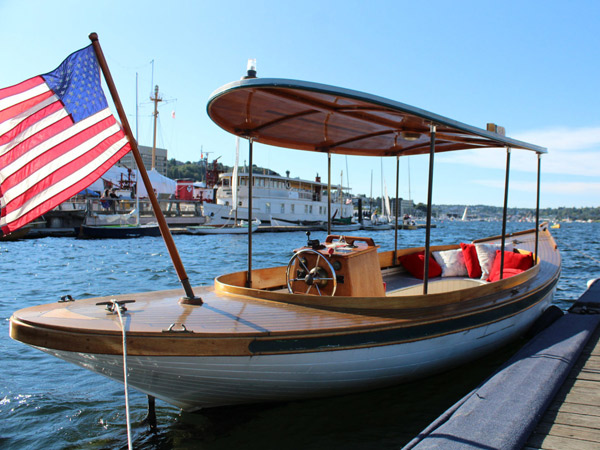 In the late 1880s, refinements in the steam engine, as well as new technologies such as naptha, gasoline, and electric motors resulted in the creation of a new type of watercraft: the small power boat. Pleasure fantail launches of the late 19th century inspired Oregon Naval Architect Pat Spurlock to design DORA, the electric launch at Seattle’s Center for Wooden Boats (CWB). She’s powered by an electric motor and control system produced by Elco, the descendant of the Electric Launch Company of Bayonne, New Jersey, which was founded in 1893 to produce electric launches powered by early dry-cell batteries. As small gas engines became more reliable, interest in electric boats faded, the company changed its name to Elco and switched to producing gas-powered launches and cruisers until the late 1940s. In the 1970s Elco was resurrected to produce electric launches and drive systems.

DORA was built by the students in the Maritime Carpentry Program at Seattle Central Community College. Wood and other materials were donated by Bob and Erica Pickett (once owners of Flounder Bay Boat Lumber in Anacortes, WA), Bob Duggan, and his nephew Mike Foley. The boat is named after Dora Duggan, Bob’s mother.

A recent installation of AGM (absorbent glass mat) deep-cycle batteries and a new 48-volt system, DORA now has more power and tops out at 6 knots instead of 4, charges twice as fast, and can operate up to 40% longer.

Operating between mid-June and mid-September, DORA takes up to six passengers for charters with a USCG-licensed captain at the helm. More information is available at the Center for Wooden Boats.