A wherry to “Make Haste Slowly”

When Frank Ward of Port Townsend, Washington, retired after his career as a healthcare cybersecurity consultant, he had a plan for putting his free time to good use and carried it out with enthusiasm. He joined a learn-to-row class at the local rowing club; soon afterward he served on the club’s board. He enrolled in the Northwest School of Wooden Boatbuilding. He did so well as a student there that he was named as one of two teaching assistants for the following year.

His new loves of rowing and boatbuilding set him on a search for a design that he and his wife Linda could safely row on the somewhat exposed waters around Port Townsend. His research led him to the Annapolis Tandem Wherry from Chesapeake Light Craft (CLC). He liked the look of the boat, and it clearly would meet his criteria for rowing, but the plywood kit offered by CLC wasn’t his cup of tea—he wanted the challenges, pleasures, and satisfaction of building a boat from lumber.

Two of Frank’s friends had recently finished building a cedar-strip canoe, and he thought “it was gorgeous.” He resumed his search for a design, hoping to find a strip-built wherry, but kept coming back to the Annapolis wherry. He decided to call CLC and ask about a cedar-strip version of the Annapolis tandem, and the person who picked up the phone was John Harris, the company’s owner and designer. John, it turned out, had already drawn a version of the wherry for strip construction, and he told Frank to visit the CLC website the following day, and the plans would be there. That day, Frank placed his order for the plans and cedar strips.

The wherry is 20′ long and Frank’s single-car garage, at 23′, was barely long enough for the project. The sports car that he was sheltering there could store outside, but the woodworking bench had to stay. There wasn’t enough room for the bench and the strongback for the wherry, so the strongback was built as an extension of the bench.

After Frank had the molds set up square and plumb, he placed the transom on the jig to hold it in the right position and the precise angle. That would have been the end of the day’s work, but when Frank closed up the shop, he pressed the button to lower the garage door. It came down like a guillotine and clipped the jig. It went flying one way and the transom took off in the opposite direction. After that mishap he came up with a new jig, which provided the clearance required, a meager 1/2″, but enough for the safe operation of  the garage door.

Before he could begin planking, Frank had to scarf the 8’-long, bead-and-cove strips together, so he made a special jig to speed the process and make stronger joints by cutting the bevel at an angle. He usually worked with the garage door open as an invitation for curious neighbors to keep tabs on his progress. When the molds went up, there was a quick, dramatic display of progress, and the conversations were welcome and encouraging, but the strip planking went slowly, and there wasn’t much to show for a day’s work. When the thrill was gone, the work didn’t go as well and mistakes happened. His workspace was small and there was always something in the way. Linda, on more than one occasion, heard a crash coming from the garage, followed by some strong language, and rushed to Frank, fully expecting to find him gravely injured. She was relieved to discover he’d only lost his temper, not any blood or body parts.

After two months of work on the boat, Frank fit the last of the planks and could step back and admire the shape of the finished hull. After planing, scraping, and sanding the planks fair, he draped the hull with fiberglass, and as he filled the fabric with epoxy, the color of the cedar came out for the first time, radiantly.

The neighbors who were checking on the progress were impressed by the beautiful cedar but dismayed that Frank said he intended to paint the hull white. Only the exterior would be painted, he reassured them, and there would be more than enough bright-finished cedar on the inside.

Prepping the interior for varnish was an arduous task. Frank sealed all of the wood with epoxy, and sanding it smooth took a toll on his fingers and wrists. They’d ache for days afterward. For the varnishing, the shop was vacuumed clean, and the garage door came down to keep the dust and the cold out. There was no going around the stern, and Frank had to crawl under the boat to switch sides.

Frank launched the wherry with a group of friends and neighbors and christened it FESTINA LENTE, a Latin saying that goes back to ancient Rome and Greece. It means “make haste slowly.” Frank and Linda took the wherry for the first row.

Not long after the launching, Frank took FESTINA LENTE to the Wooden Boat Festival in Port Townsend. Chesapeake Light Craft had a booth there, and John Harris was in attendance. He noticed FESTINA LENTE and introduced himself to Frank, complimenting him on his work. John said that his boat was the first strip-built Annapolis wherry to be completed, so it has the distinction of being Hull No. 1.

After Frank and Linda enjoyed FESTINA LENTE for a couple of years, they put the boat up for sale. It was purchased by a Seattle man, Giles Stanton. He and his rowing partner Cathy Morgan entered the Great Cross Sound Race, a 7-mile out-and-back across Puget Sound. They won their class. That FESTINA LENTE was the only boat in her class shouldn’t be held against her. She’s one of a kind. 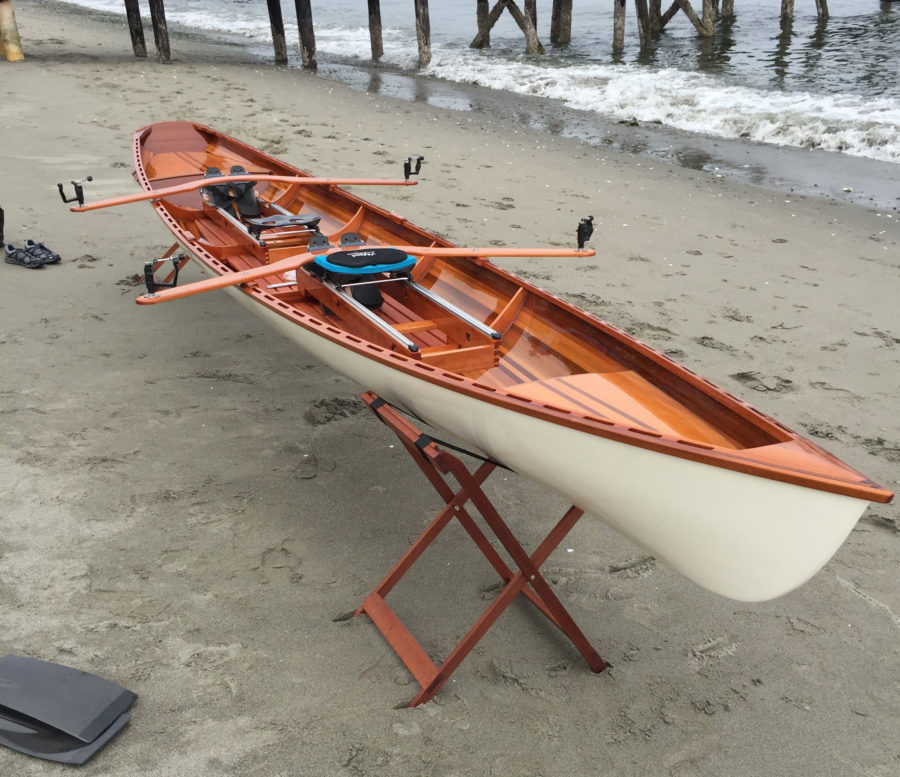